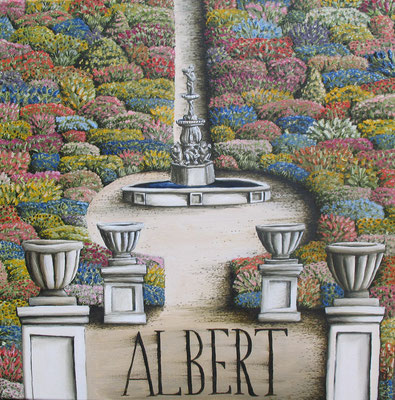 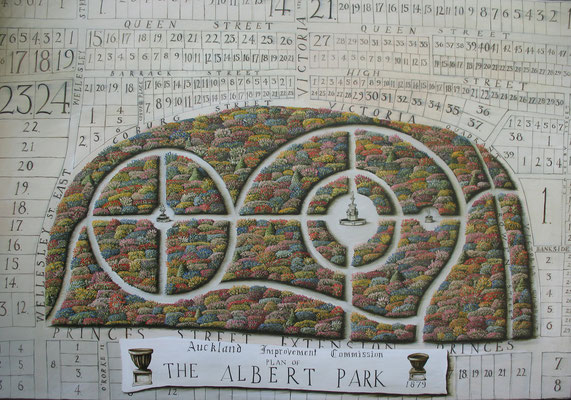 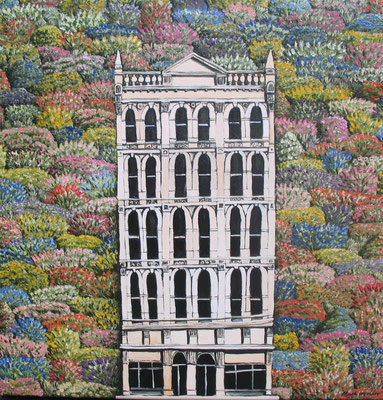 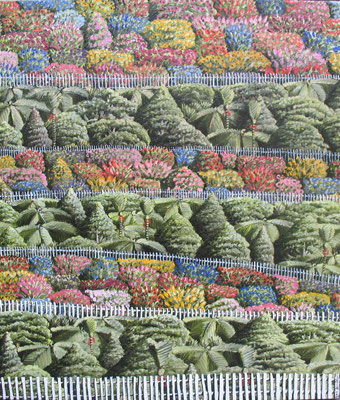 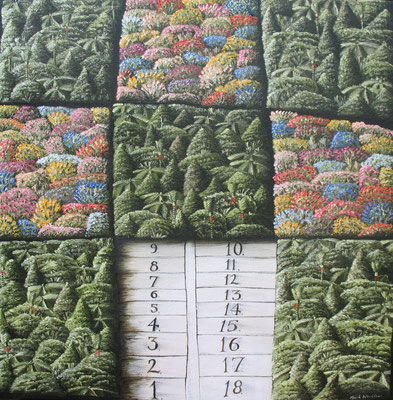 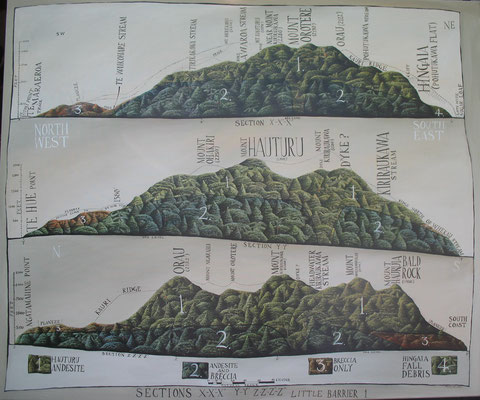 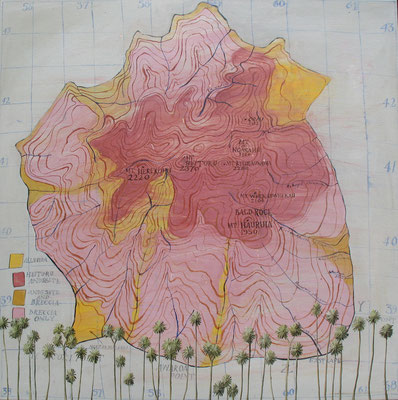 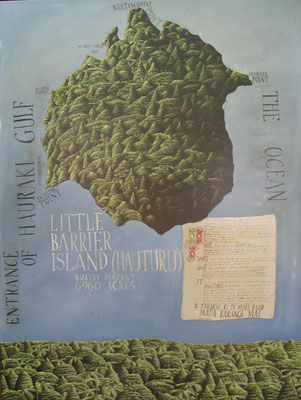 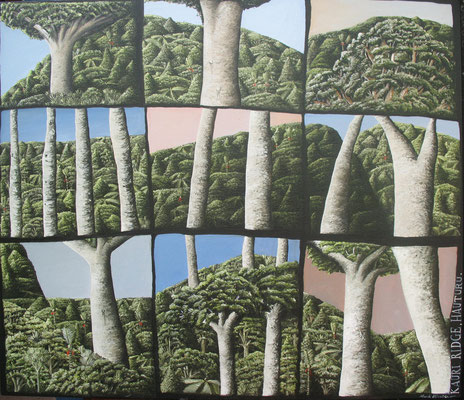 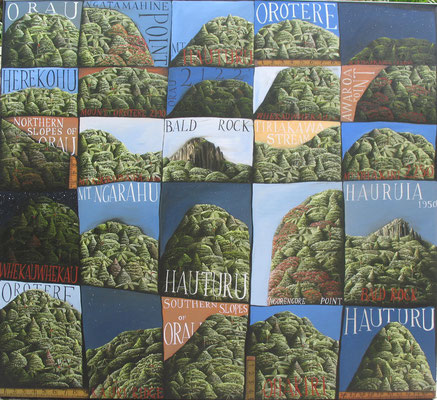 This exhibition includes a major work “The Albert Park” which relates specifically to early development right in the heart of
Auckland city. In the light of the current controversy surrounding the government’s aspirations towards Auckland’s future development,
Wooller’s striking exhibition is a timely reminder of the results of reckless or negligent town planning. In Wooller’s previous
exhibition, the loss of creeks, waterfalls, trees, gardens and bush were subtly referenced. The latest exhibition “Mapping it
Out” is more specific where detailed maps of early subdivisions are recorded such as the map of Albert Park and surrounding
land which was also subdivided. Ironically the original map of Albert Park is titled “The Auckland Improvement Commission
Plan of Albert Park”, subsequent to the commission that was established for this purpose. The disheveled state of many
areas of Auckland in the late 19th century is well recorded and pursuant to the establishment of the commission, legislation
was passed in 1879 to acquire land, including the Albert Barrack reserves, for the establishment of Albert Park. Funds were
allocated to provide for ….. “works of public utility or ornament or for furtherance of educations, science, and art…..”
This development did not progress or end entirely without acrimony. Eventually the ex-mayor of Auckland was taken to task
by the Wellington Evening Post no less, vehemently claiming and accusing him of……”frittering away half a million of money
…in cutting up into building sections (The Albert Barracks reserve), a splendid recreation ground in the midst of the city, and
in destroying the Maori wall, one of the most valuable mementos of the early days of the colony. The Auckland people would
now give any money to get their recreation ground back, and only a few ….sections have been taken up”
The ex-mayor responded vigorously stating “..… the greater portions of the land had been leased, valuable houses built
thereon and as the streets are all wide well made, drained and lighted and planted with trees, it is considered the most pleasant
and fashionable part of the city…”(1)
Controversy was nothing new and it is perhaps comforting to know some intuitive NZ residents over 130 years ago were also
cognisant of the effects of unbridled development. As Wooller’s painting “The Albert Park”, which is based on the original
survey map shows, a large proportion of the original army land was actually subdivided for building, deviating somewhat from
original intentions.
A year later in 1879 however, Little Barrier Island was declared a wild life sanctuary. The topography of this ancient and
extinct volcanic Island is depicted in “Hauturu (Little Barrier) Cross-section” with references to original maps and survey documents
which date back to the early 19th century. The hilly terrain is accentuated by Mt Hauturu which peaks at 722 metres
(2369 ft.) high. A third of the forest had been cleared up to two centuries previous, but all but 20 hectares of land has since
been reforested.
Other aspects of New Zealand’s striking landscape are reflected in this new series “Mapping it Out”, such as the Giant Kauris
in “Kauri Ridge” and foliage and flowers in “Bush Garden”.
This exhibition is a compelling celebration of the unique aspects of North Island terrain, which highlights the importance of
ongoing vigilance and consideration in respect of the protection of our relatively remote environment.
(1) NZ Herald Vol VVI issue 559, 15.10.1879, p3 (reproduced letter sent in response to Wellington Evening Post article
1879) Text Warwick Henderson, May 2016