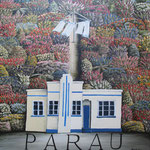 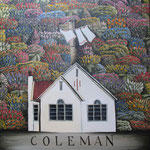 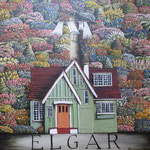 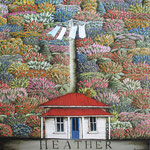 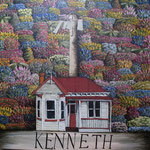 North Auckland artist and gardener Mark Wooller is issuing a profound statement relating to current events with his new exhibition of paintings entitled “Big Garden”. Wooller states; “The once traditional quarter acre Auckland section is now almost a distant memory. In my new series of work I have expanded the lush gardens to cover the whole section – totally surrounding or “safeguarding” the houses. My response to council proposals could be seen as sentimental or an overreaction to current events, but the reality is the new intensification policies are already generating a growth in property prices, while Auckland gardens are shrinking or disappearing.”

Traditional gardens, fast becoming obsolete, are shown in abundance in this show with profusions of snapdragons, hollyhocks, snowdrops, lavender and roses. It is almost ironic to consider many traditional gardens in New Zealand, even the western world are really only 150 to 200 years young, yet now appear under threat. Exotic flowers and plants came to New Zealand as late as the 19th century, while cultivated roses and hydrangeas for example, were only introduced into England in the 18th century. Many exotic plants were brought to New Zealand by settlers in the 1800’s on immigrant ships. It is interesting to note English nurserymen were selling New Zealand Manuka brought back by Captain Cook in 1776 by the end of the 18th century, such was the interest in exotic plants in Europe at this time. The famous botanist Joseph Banks, who travelled on Cooks voyages to the South Pacific in the 18th century, collected over 30,000 plants in the course of his incredible travels. These not only included several varieties of the eponymously named “Banksia” plant discovered by him in 1770 during Cooks first expeditions, but plants such as azaleas, camellias, Hydrangeas, rhododendrons and that Autumn (or fall) beauty, Virginia creeper.

Wooller’s early years were spent working with plants; propagating, planting and growing and his knowledge and empathy with gardening is obvious in the alluring and ordered manner of the flower bed designs, particularly in “Big Garden”, “Elgar” and “Parau”. The structure and design aspect of each painting is notable in this new series, specifically in the grid or matrix type compositions of “Crummer Road”, “Victoria”, “Hollyhock”, “Auckland Volcanoes” and “Auckland Islands”.

A gentle reminder relating to the fragile position of Auckland’s classic houses has been highlighted with stylish Victorian Villas, Californian Bungalows, and Art Deco houses featuring prominently in many of the paintings. These enduring designs have long out-lasted thousands of houses built in the last 30 years which were severely compromised with shoddy materials and suspect building practices. It is ironic that while these houses are currently either being re-clad, reframed or knocked down, the classic houses depicted in “Big Garden” also stand in the shadow of bulldozers due to proposed changes to town planning protections.

Auckland’s climate lends itself to being a wonderful “Garden City”. Unfortunately the current demographics and future development prospects do not bode well for Auckland’s residential gardens and traditional homesteads. Wooller states...”It is sad to see much of the fertile soils and gardens of Auckland being developed and paved over. In many cases native trees, plants and even houses have been taken as well”.

Mark Wooller, who tends a large and rural home garden, has ingeniously fused his passion for the environment, his garden and his art into a thought provoking and luxurious exhibition of paintings.